The FAA on April 27 began publishing electronic maps for airports across the country that detail where and at what altitudes remote pilots may hope to achieve clearance (Part 107 authorization) to fly unmanned aircraft in certain types of controlled airspace. This information will be of interest to companies like ours that are providing cutting edge UAV data capture missions (see our UAV services) and to many of you who are following this space. The maps will help drone operators improve the quality of their Part 107 airspace authorization requests and help the FAA process the requests more quickly – note, the system used has been designed and authored to the public using ArcGIS. 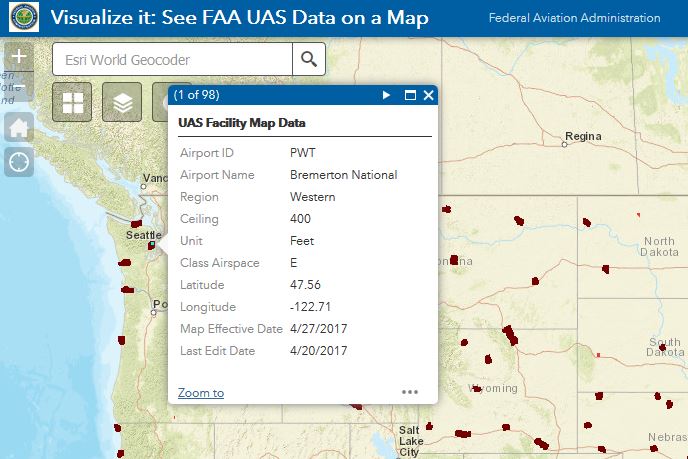 This via the FAA on April 27 – The Federal Aviation Administration (FAA) today published more than 200 facility maps (class E airports) to streamline the commercial drone authorization process. The maps depict areas and altitudes near airports where UAS may operate safely. But drone operators still need FAA authorization to fly in those areas.

According to a recent article in AOPA, “The maps lay foundation for the Low Altitude Authorization and Notification Capability (LAANC), a system for drone traffic control that the FAA hopes to have online by the end of 2017. Remote pilots are expected to benefit from more rapid access to airspace where currently the time required to gain authorization makes many operations near airports impractical, while manned pilots also will have more information available to them about where routine unmanned aircraft system (UAS) operations are expected to occur. ” Source: AOPA

Some noteworthy details of the newly provided maps:

Note, the FAA also makes available several OpenData products, including UAS facility map data – The UAS Facility Maps are designed to identify permissible altitudes (above ground level) at which UAS, operating under the Small UAS Rule (14 CFR 107), can be authorized to fly within the surface areas of controlled airspace. See these data HERE

Are you interested in learning more about how GEO Jobe is using UAV technology in our business? We’ve shared a number of project updates, images and videos from the field (and from the air) via our Twitter @geojobeuav and Instagram @geojobeuav.

A recent #UAV job where we collected and delivered data for a proposed utility right of way. 1ft contours, DSM & DTM #uavmapping pic.twitter.com/bf9ddc7leG