In College I majored in urban geography. I was totally enthralled with urban planning related matters, architecture, and cities, in particular, how cities grew and the factors that drove people to urban centers. Naturally, as a geographer, it made sense that these things would all, in concert, affect how businesses grew and in particular where businesses would (ideally) locate. A recent Story Map from Esri looks at all these things. Enjoy this Story Map Shortlist that explores the 35 cities vying for Amazon’s next HQ – so awesome!

The map walks us through the cities that are likely at the Top of Amazon’s selection list. Each map providing stats, charts, graphs and more that explore and analyze such influencing factors as household income, home values, population, affordability, population growth, education, and more.

A close look at Amazon’s request for proposals shows that the company is looking for very particular things. For example, the document expresses a preference for metro areas with more than 1 million residents, and emphasizes the need for a highly educated talent pool. In addition, Amazon said, the ideal site would be easy to fly into, and would have enough space — as much as 8 million square feet — for years of growth. Put all those criteria together, and the list of the most ideal regions begins to narrow quickly. Exploring the Story Map, the reader can cycle through each of the 39 possible locations and view details of all the variables that will affect Amazon’s decision. 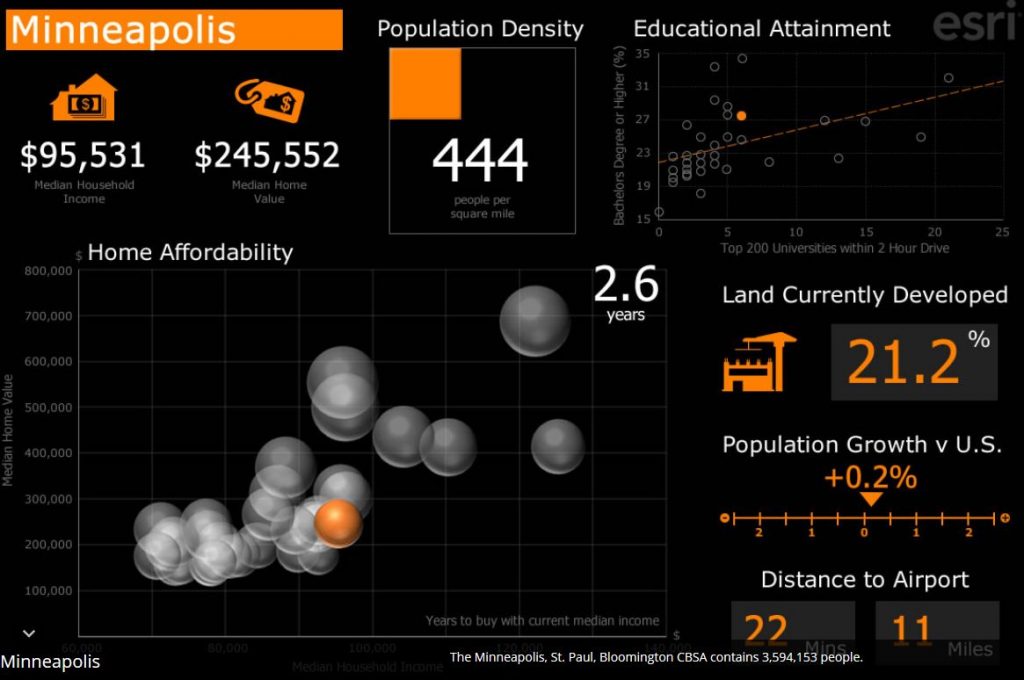 So, based on these data, where do you think Amazon will locate and why?

From the Story Map, ” The Washington Post recently created a list of 39 Cities in North America that their analysis said had the right characteristics to win HQ2. This is the US shortlist. Read the full article here.

These are more subjective metrics. Still, after taking those into account, what’s left are a number of major destinations such as Atlanta, Philadelphia and, yes, the nation’s capital — but also a series of more interesting locales. Baltimore, Detroit, Raleigh-Durham, Nashville, Mexico City and Toronto all made the list, as did Cleveland, Minneapolis-St. Paul and Orlando. According to the study, a second headquarters in a different time zone could help set Amazon apart and expand its economic, political and cultural influence to the East Coast.

Here’s the full list of 39 metropolitan areas included in The Post’s analysis:

Amazon is seeking a home for its HQ2, a $5 billion second headquarters somewhere in North America