The National Geospatial-Intelligence Agency and the National Science Foundation publicly released new 3-D topographic maps of Alaska Sept. 1 in support of a White House Arctic initiative to inform better decision-making in the Arctic. The 3-D digital elevation models, or DEMs, are the first to come from the ArcticDEM project, which was created after a January 2015 executive order calling for enhanced coordination of national efforts in the Arctic. 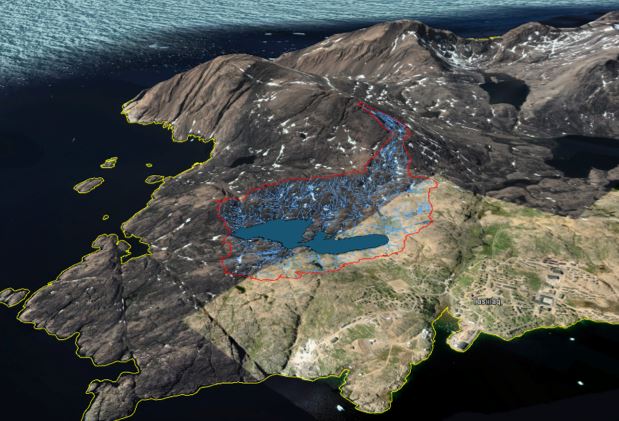 Lake and the catchment that provides drinking water to the community of Tasilaq, Greenland. (Image credit: Melisa Larsen, ASIAQ, the Greenland Survey. From DigitalGlobe imagery.)

The models are based on 2-meter resolution images captured by Digital Globe commercial satellites. This technology is significant in polar mapping because it allows for more thorough coverage of the Arctic than did traditional imagery collection by aircraft, which is limited in the inhospitable and remote polar region. “The models will play an important role in informing policy and national security decisions,” said Robert Cardillo, NGA director. “They may also provide critical data and context for decisions related to climate resilience, land management, sustainable development, safe recreation and scientific research.”

The project brings together a unique set of national assets, including the White House Office of Science and Technology Policy, NGA, NSF, the Polar Geospatial Center at the University of Minnesota, University of Illinois, Ohio State University and Cornell University.  Teams from NGA and NSF worked with these partners to launch an unclassified, open Arctic portal where the DEMs and emerging information is available to the public. Esri, a geographic information system provider, hosts the site at nga.maps.arcgis.com. The public website hosts Webmaps, map viewers, other DEM exploratory tools, nautical charts, sailing directions and infographics, and a downloadable Pan-Arctic map with mission-specific data layers.

Some uses of these data include:

The White House Arctic Initiative supports efforts to understand the Arctic, engage with residents, and develop tools, products and services that improve federal, state and local activities in the Arctic…

Of interest, here at GEO Jobe we are actively involved with UAV data collection along with UAV sourced data analysis and see a huge opportunity for such efforts to complement and or take advantage of the Arctic 3D data products. For example, initial analysis of the ArcticDEM could identify areas of particular interest which could then be flown by UAVs for further inspection

See also, ways to use elevation data in the Arctic

More information on this effort is available here, and all of the high-resolution ifsar elevation data, new topographic maps based on this data, and related data, will be available on The National Map web portal. See also the Whitehouse dev portal for more suggested tools.