An interesting story from BC Canada as a savvy developer from a local GeoTech startup in Victoria, BC, Canada took it upon themselves to hack and mashup a powerful webmap in order to put all the data and information at the fingertips of the public. The resource, BC Firemap Plus, helps the public to be informed about wildfire dangers, emergency response resources and more. Esri Startup program company Echosec director of product development, Neil Johnston, had a personal interest and used his skills to quickly pull together public, open data and make it available to all. 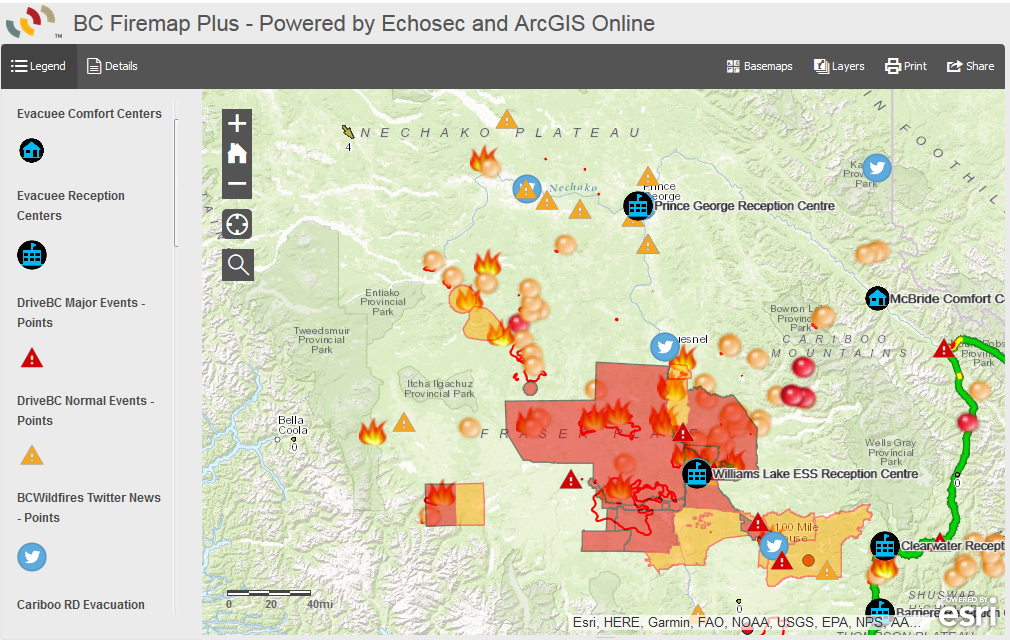 The story of the map comes from the recent flare up of wildfires in the Interior of British Columbia. Wind and weather conditions have made battling the flames difficult and the public has been faced with road closures, making it even more difficult to plot an escape strategy.

Enter Neil Johnston (@NeilJohnston), Director of product design from Echosec. Neil turned to online sources and public data feeds etc… provided by various government agencies in order to determine a strategy for his parents to get out of harms way. Johnson realized quickly that he was faced with dealing with a mish-mash of data feeds and products from various agencies, resulting a puzzle that he needed to piece together. Naturally, he thought that he could put his skills to use and create a public facing map that would help others in the same situation.

Notice in the image above sourced from an article on CBC, they point the reader to a variety of government agencies in order to access data and updates – this is quite cumbersome and time consuming, not to mention distressing for those affected who are likely looking for information via their mobile devices and smartphones.

Neil had the knowledge and technology available to create the product. Initially he turned to google and quickly built a map of feeds. He then turned to his company, Echosec, for support and they ported the map/app to the ArcGIS Online environment in order to create a public map service that was reliable and most important, mobile friendly.

According to Johnston, “I think the biggest problem we’ll be running into is that while more and more of this information is being pushed online, a lot of rural BC residents don’t have that access still,” he said. “Which means the onus is on those of us who do, to keep them in the know, by cell and landline, as the situation develops.” Source: Cranbrook Daily Townsman

Johnson has penned details of his experience developing the resource over on the Echosec blog. Of particualr interest he shares: The ESRI’s ArcGIS is an excellent fit as:

That’s valuable for building something like BC-Fires.Echosec.Net on the fly.

Live traffic data included in the public information map includes data from ArcGIS online, weather data (wind), lightning strikes, smoke areas, active fire locations (BC Gov),  fire perimeter polygons, road closures, highway camera feeds, public support facilities and shelters, social media feeds via Echosec Search and more. The result is a one stop shop of important and useful data. Johnson notes that people should realize that the most reliable and current data is often best to find directly from the source agency. He also noted that thanks to support from his company, Echosec, the public map resource will be maintained and made available to the public throughout the summer which is expected to be a very active wildfire season in British Columbia.

The story really is exactly what the Esri startup program is all about – fostering innovation and getting technology startups interested and skilled in building and deploying maps, apps and services using GIS technology, in this case, ArcGIS Online. The company took advantage of their resources along with open data to build and deploy a service that was needed quickly in order to save lives.

Do you maintain or know of a useful online Webmap or map resource that can help support the BCWildfires emergency response effort? Please share in a comment or message @gletham on Twitter 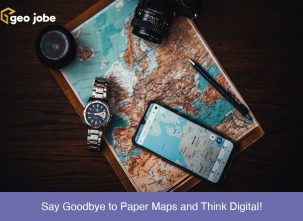