Here we are steamrolling into the holiday season and many of us are scratching our heads wondering what to get for the GeoGeek on our holiday gift list. Here’s a really fun idea from NASA – Exotic Cosmic Locales Available as Space Tourism Posters. These images are free to download and print and will look fantastic on your office wall! 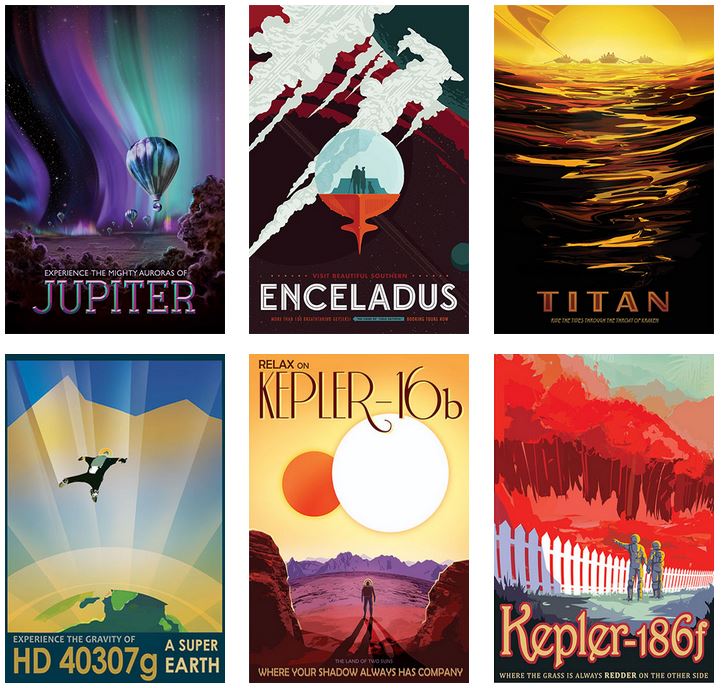 Imagination is our window into the future. New travel posters from NASA’s Jet Propulsion Laboratory, Pasadena, California, envision a day when the creativity of scientists and engineers will allow us to do things we can only dream of now. You can take a virtual trip to 14 alien worlds, and maybe even plaster your living room with planetary art, via the new, futuristic space tourism posters. The posters are available free for downloading and printing at:

Note: High resolution PDF and TIFF image files are provided for each poster.

Last year, five posters depicting planets beyond our solar system were introduced as part of JPL’s Exoplanet Travel Bureau series. They are included in the latest set of 14 posters, which also show such locales as Mars, Jupiter’s moon Europa, Saturn’s vapor-spewing moon Enceladus, and the dwarf planet Ceres.

The posters are the brainchild of The Studio at JPL, a design and strategy team that works with JPL scientists and engineers to visualize and depict complex science and technology topics. Their work is used in designing space missions and in sharing the work of NASA/JPL with the public.

The California Institute of Technology in Pasadena manages JPL for NASA.

More information about JPL is at: http://www.jpl.nasa.gov

Please consult the JPL Image Use Policy for further details