Are you considering Getting Started With Drone2Map for ArcGIS? Something we’re all excited about here at GEO Jobe is data collection, in particular, aerial data collection and the added capabilities afforded by including Drone2Map in our client solutions. Fresh out of beta, Drone2Map for ArcGIS was released today by Esri with new features and enhancements. The desktop app allows people to process images from drones and quickly create imagery products for mapping, analysis, and sharing across the ArcGIS platform. Note, used together with ArcGIS for Server, you can share your drone imagery as an image service, or behind your firewall with Portal for ArcGIS 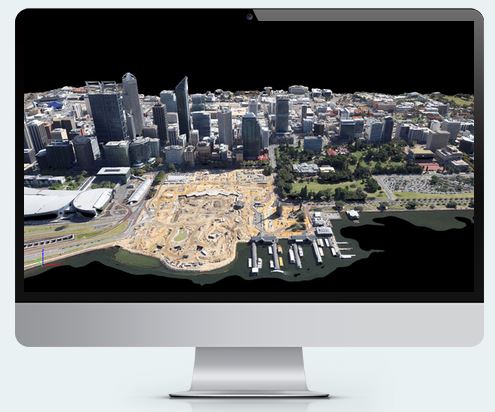 Drone2Map offers in-field rapid imagery processing that allows the pilot to confirm that the drone’s flight has captured imagery of the full area of interest, reducing the need for costly return trips to the field. The app detects camera and sensor parameters, then intelligently applies appropriate defaults.

As more companies come on board with their Section 333 exemption, allowing them to deploy drones to gather aerial data for commercial projects, demand for solutions provided by the likes of Esri and Pix4D will soar. UAVs working in the “drones as a service” capacity will become the preferred data collection workhorse for utilities, oil and gas, local government, forestry, agriculture, mining… the list is seemingly endless! A recent article in Fortune went as far as noting “I think this market is going to be very, very large [and] ultimately much bigger than the hardware market… Services is the future of this industry.” (Source: Fortune)

According to Esri (as we heard this summer at ESRIUC, with this release of Drone2Map, users will be able to

Visit esri.com/drone2map. to learn more and see also more details about the photogrammetry engine in Drone2Map which is powered by Pix4D

Drone2Map is a fine solution to get your data off the bird and ingested into the ArcGIS environment, however, you may also want additional functionality and features that are provided via the Pix4D software solutions. Simply put, Pix4Dmapper software automatically converts images taken by hand, by drone, or by plane, and delivers highly precise, georeferenced 2D maps and 3D models. The video below shows off some of the latest (March 2016) features of Pix4D Mapper:

According to tech author Troy Lambert (@tlambertwrites), there’s a number of pro and cons to drone mapping that users should be aware of:

Cost effectiveness is one of the big advantages of drones, but it is certainly not the only one.

Like any other advancement though, the story of drones is not an entirely happy one.

Uncertain Regulations. The FAA has yet to determine the full extent of rules regarding drones, and new rules are sure to follow as the small aircraft become more common.

Privacy Issues. What if a drone records faces or certain activities with its camera. Whose property is that footage, and how much obligation is there to get permission to use it? Another issue is facial recognition and the possibility of identity theft. Where footage is stored depending on what it contains may be the next thing that needs to be regulated.

Amateur Pilots. As drones become more popular and almost anyone can obtain and operate one, crashes may become more common, whether that is between aircraft, or drones crashing into objects, power lines, or falling from the sky for other reasons. The FAA does have rules about safety and where drones can be operated, but it is certain there are those who will not follow those rules.

Tracking. Mapping who owns drones for what purpose is relatively easy. Tracking them in the sky is a little harder, although a technology called Gecko, already in use in army vehicles, is being deployed by Thales in civilian applications. It uses Squire radars and long-range infrared cameras to detect the small aircraft.

Illegal activity. Just as law enforcement can use drones, so can criminals. There have already been instances of criminals using drones to case locations before burglaries, and even provide them with aerial surveillance while committing crimes.

Are you thinking about a UAV (drone) data capture project or in need of some support in this area? Feel free to contact us for a consult or project estimate, we’d be glad to plan a mission with you!