Our latest news/PR shares details of our UAV and Aerial Mapping Services group being recognized by industry leader, Pix4D, for “Smart City” mapping and the creation of a 3D model for the City of Lewisburg, Tennessee.

NASHVILLE, Tenn. – Dec. 4, 2017 – PRLog — GEO Jobe UAV Services group has been extremely busy this fall flying season, and there’s no sign of slowing down any time soon – although a break over the coming holiday season is going to be very welcomed! Recently, a UAV project conducted by the team in Lewisburg, Tennessee was selected as a weekly Monday “3D” spotlight feature by popular UAV solution/software provider, Pix4D. Each Monday, Pix4D highlights a customer / client user project in a popular segment they call #3DMonday. Details of the UAV project, including technical specifications and details are shared around the World to the Pix4D user community and via their social media channels.

The Lewisburg water utility is a GEO Jobe GIS Consulting client, contracting GEO Jobe for a number of services, including mapping their utility assets and network.  GEO Jobe secured a contract to provide base mapping services and feature extraction for the City of Lewisburg. We used photogrammetry to create orthomosaics to assist the client in capturing and updating GIS features for Emergency 911 address databases, facility management, asset location, and building information models.  Additionally, a side product we a created in the form of a 3D model for City marketing and planning uses.

According to Jeff Lawrence, UAV Business Development at GEO Jobe UAV, “GEO Jobe selected Pix4D for its flexibility and the options to edit the models and the project.” 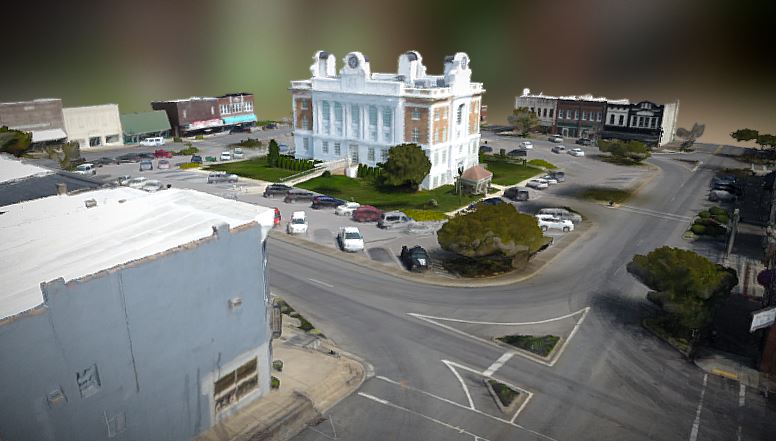 See on Pix4D Community:
Note, you can view the high-resolution 3D model on Sketchfab

GEO Jobe UAV provides high-resolution digital mapping products to public sector clients in local and county governments, as well as private sector clients in the engineering, construction, utilities, and Land Surveying industries. We use drones to deliver standard ortho-aerial updates on sites ranging from 3 acres to almost 600 acres. We also deliver topographic data and models with 1′ contour lines for survey, drainage analysis, and grading compliance. Most recently, GEO Jobe has been working closely with Trimble and their Catalyst mobile GNSS solution in order to obtain very accurate GPS control for UAV flights using Trimble technology and an Android smartphone.

There are a wide variety of uses and advantages for using a UAV for construction-related projects. Below is a list of some typical applications for UAS that GEO Jobe can provide:

About Pix4D
Established in 2011, Pix4D software has been committed to creating professional, georeferenced maps and models from drone imagery. The company was founded as a spinoff of EPFL in Switzerland. pix4d.com

With a fleet of Unmanned Aerial Vehicles (UAV’s, or drones) GEO Jobe is now offering high resolution low altitude orthophotography services in Tennessee and surrounding areas (Arkansas, Mississippi) and hosting options via our GeoPowered Cloud. We are providing orthophoto planimetric mapping products including small area rectified mosaics, digital surface models (DSM), digital terrain models (DTM), and 3D models as well as UAV data hosting & image services.  Founded in 1999, GEO Jobe is a geospatial industry leader responsible for several top apps in the ArcGIS Marketplace including the award winning Admin Tools for ArcGIS Online, and the GEOpowered Cloud solution for enterprise GIS. GEO Jobe has been an Esri business partner for 16 years and has received multiple awards from Esri including the 2015 Innovative Marketplace Provider and the 2013 Organization Use of ArcGIS Online award.